It has been reported that Manchester United youngster Sean Goss is hoping to follow in the footsteps of Michael Carrick. 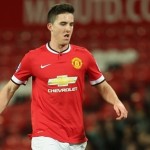 Goss is one of the most highly rated youngsters in the United squad and the midfielder managed to make his debut during the pre-season clash against Paris Saint-Germain during the summer USA tour.

Goss is tipped by many to become a regular for United’s senior side in the future and the youngster has now revealed that he is hopeful of following in the footsteps of veteran Carrick.

The midfielder told the Manchester Evening News: “I really look up to him as a player, he’s top class and to come on for him made my debut even more special. His passing is incredible, he rarely gives the ball away and he acts as an anchor man so he is a big part of the team.

“I spoke to him a few times on tour and I also picked up a lot from him in training and when he played for the Under-21s last season. That was a big help.”