It has been reported that Manchester United winger Adnan Januzaj is fed-up at Borussia Dortmund. 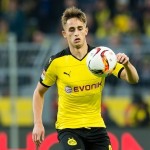 United are considering recalling the Belgium international from his loan in January.

The People says United’s hopes of a return will hinge on Dortmund agreeing to their request.

Januzaj’s frustrations boiled over last week when he refused to play for Belgium’s Under-21 team after being left out of the senior squad.

His hopes of landing a place at Euro 2016 are now hanging by a thread and a role as a Dortmund sub will not help his cause.