It has been reported that Manchester United winger Adnan Januzaj says he’s a better player for being part of Belgium’s World Cup campaign. 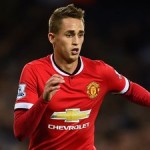 Although he only played for 60 minutes, during a group win over South Korea, the experience was wholly educational.

“I am 19 years old so to go to the World Cup was a really big thing for me,” Januzaj told ManUtd.com.

“I didn’t play too much but I still learned a lot during the tournament and took a lot from the experience. It was really good for me to be there with my team-mates. I have to say that the highlights were the lessons I learned. It will definitely benefit me in the future.

“I would love to go to the next World Cup,” Januzaj continued. “Like I say, I went to Brazil to learn and maybe for the next World Cup I will know exactly what to expect and what is waiting for me. There is a long time to go before then, but I hope to go there with Belgium.”