It has been reported that Ander Herrera says he sees himself long-term with Manchester United. 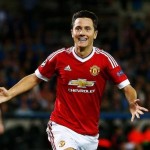 The Spanish midfielder has been linked with Barcelona this season.

But he told United Review: “What I am doing at United, I enjoy a lot so I don’t want this dream to finish. I have to play as well as possible if I want to play as long as I can at this club.

“Now I am here, I always say the same thing: the most difficult thing is to stay at a big club. Of course, it is difficult to arrive at a big team in the first place, but it is even harder to stay there. The club has the possibility to sign new players and it’s a very powerful club so all players want to play here. I have to fight for my position and gain my position and I will do it.”


Drogba Backing Arsenal To Win The Premier League – ‘They Have Got Petr Cech!’