Reports are out claiming that Angel Di Maria has been named Argentina’s foreign-based player of the year for 2014. 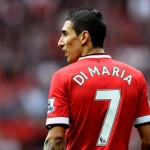 The Manchester United winger has been voted in by Argentina’s sport journalists, beating Barcelona superstar Lionel Messi to the award.

The 26-year old former Real Madrid star landed the Olimpia de Plata (Silver Olimpia award) on Tuesday to become the first man apart from Messi to win the award since the diminutive maestro was first successful in 2006.

Di Maria, who joined United for close to £60million had a successful 2014 in helping Real Madrid win the Champions League, playing a role in Argentina’s second-placed finish at the World Cup and enjoying a positive beginning to life at Old Trafford.

Velez Sarsfield striker Lucas Pratto was named the best player in the Argentine league after an impressive individual calendar year.