Reports are out claiming that Daley Blind has revealed that he was close to joining Atletico Madrid in 2013. 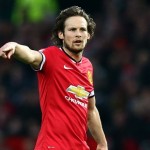 The 25-year-old Dutch international was a target for the Spanish club two years ago but did not want to leave Ajax on a free transfer.

Instead, the Holland international signed a new deal with the Amsterdam giants, shunning Diego Simeone’s advances, before being bought by United for £13.8million last summer.

“I could have signed for Atletico if I wanted to but I would not have cost them anything apart from my wages,” he told Helden.

“They did not really have to make an investment to sign me. For me, that is always a bit of a disadvantage.” Forbes Name Manchester United As The Richest Club In The World