It has been revealed that Manchester United utility Daley Blind is looking forward to Sunday’s trip to Liverpool. 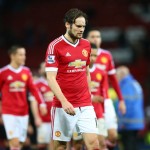 The Dutch international told MUTV: “As a player you want to be involved in these games.

“Playing at Old Trafford is a dream come true, but to go to Anfield and feel the rivalry in the stands was amazing. As a player you feel the pressure because these games give you something special. Its games like these that make you want to be a footballer. In English football it’s great that many stadiums have stands so close to the pitch, so you can really feel the atmosphere. Anfield is one of those stadiums where, against United, everything has a bit extra. It’s a great feeling.”