It has been reported that Manchester United fullback Matteo Darmian admits he always wanted to play in England. 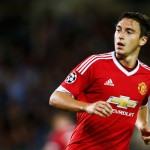 “I used to watch the Premier League on television and it was well known that it was perhaps one of the best leagues in the world,” Darmian told manutd.com.

“So, when I got the call from United, I didn’t have to think twice about it at all. For me, it was a big step in my career and a really big opportunity personally that I didn’t want to let slip away. Of course, Manchester United are one of the biggest clubs, not just in England but the whole world, and, because of the history as well, all these factors made it an easy decision for me.”