It has been reported that Manchester United goalkeeper David de Gea was outstanding for Spain in their Euros win against Ukraine. 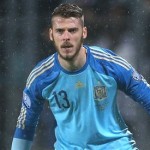 “I know David Is the future goalkeeper of Spain. He showed this tonight. He just needed the opportunity,” said Cesc.