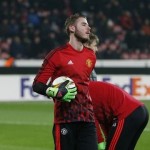 It has been revealed that David De Gea was injured during the warm-up as Manchester United prepared to face FC Midtjylland on Thursday night.

The Spanish international goalkeeper was a late withdrawal for the Europa League Round of 32 first leg clash which United ended up losing 2-1 at the MCH Arena in Herning.

De Gea suffered a knee injury which required treatment and forced him out of the starting line-up with Sergio Romero taking his place.

Louis van Gaal was unable to name a substitute goalkeeper on the bench as the Red Devils only took De Gea and Romero to Denmark.

Van Gaal has confirmed that it was a knee problem and De Gea will go for scans on Friday, putting him in doubt for Monday’s FA Cup fifth round clash with Shrewsbury Town.