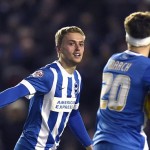 It has been reported that James Wilson says he is only thinking about the job at hand with Brighton & Hove Albion.

The 20-year-old striker joined the Seagulls on loan from Manchester United in late November and is looking to perform at his absolute best for the remainder of the season for the Championship table-toppers.

On Saturday, Wilson scored a lovely goal in the 50th minute as Chris Hughton’s side came from two goals down to beat Charlton Athletic 3-2 at The Amex and is now eager to kick on and do everything in his power to lead his loan club towards Premier League promotion rather than think about what is happening a Old Trafford.

“I don’t know, I’m here to score goals. I’m here for Brighton,” he told Sky Sports when asked if his goal proved something to United.

“I’m here for the manager and for the fans, so my full focus is on Brighton. It’s one of them, I’m here for the season, I think I can be recalled anyway, but if I’m not needed then I can show my worth at Brighton.”

Regarding his first Brighton goal, Wilson added: “The first goal is the hardest, I’m glad to be off the mark.

“It was an amazing feeling to score and to come back from 2-0 down.

“It’s a different style, you can see that when you watch the games. It’s a lot more frantic and end-to-end stuff, which will probably play more into my hands.

“Hopefully I can get more goals and we can push for promotion.”

David Moyes Delighted With The Signing Of Marouane Fellaini