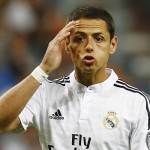 It has been revealed that Manchester United striker Javier Hernandez won’t consider a move to Orlando City this summer.

The Daily Mail reported that the Mexican international star is poised to turn down overtures from Orlando City to stay in Europe.

The Manchester United striker, currently on loan at Real Madrid, has been offered a lucrative deal by MLS standards which is understood to be worth around £2.8m a year over five years, plus commercial spin-offs.

But Chicharito isn’t ready to quit Europe just yet.