It has been revealed that Manchester United midfielder Jesse Lingard has been called into the England squad to cover for injured teammate Michael Carrick. 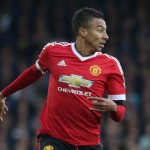 The 22 year old has been rewarded for his fine recent performances for the Reds and will join up with Roy Hodgson’s squad on Sunday to help bolster the ranks after Carrick and Leicester City’s Jamie Vardy were forced out.

Carrick was stretchered off in the last minute of England’s defeat to Spain on Friday and has returned to United for further assessment ahead of the Reds’ next game against Watford on 21 November.

It is Lingard’s first time with the senior squad, though he has made 11 appearances for the Under-21s, having made his debut at that level as a substitute against Scotland in August 2013.

Carrick has suffered terrible luck through injury for England, illustrated by the fact he has only made one appearance at a major finals for his country – at the 2006 World Cup in Germany.

England returned from Spain on Saturday and, following the tragic events in Paris on Friday night, it was decided that the game with France would go ahead.