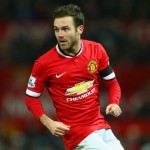 It has been reported that Juan Mata is excited playing with good friend Ander Herrera at Manchester United.

The duo have been in inspired form of late, each turning out to be two-goal heroes in the Reds’ last two games.

“I think it’s because of the relationship we’ve had over the years and because we understand football and life in more or less the same way,” Mata told ManUtd.com and MUTV.

“The first goal at Anfield is a good example of that – he controlled the ball, turned and knew where I was already running to and he put the ball there. Ander is a quality player and I’m very happy he’s here and playing and performing well.”