It has been reported that Juan Mata does not believe Manchester United will have it all their way in the Capital One Cup on Wednesday night. 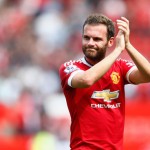 The Red Devils host Ipswich Town in the third round of the league cup and although they are expected to comfortably progress to the next stage, Spanish midfielder Mata is paying respect to Mick McCarthy’s visiting Tractor Boys.

The Spanish international said : “On Wednesday we start in the Capital One Cup against Ipswich Town,”.

“They are a historic team in English football and I’m sure it won’t be an easy game for us. After that we play against Sunderland, they need the points and they will come to Old Trafford trying to win.

“We hope to play good and be successful on both games. It would be a joy for everybody.”