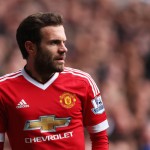 It has been reported that Manchester United midfielder Juan Mata says they want to stall Leicester City’s title charge.

Mata explained: “The FA Cup final is in a month’s time. Now we know that we have five games remaining.

“Five finals that we want to win and I feel we are ready for, starting next Sunday against Leicester.

“They are fighting for the title and are full of confidence after the win against Swansea, showing how competitive they have been this season; having said that, we must get those three points.

“The previous game against them left us with a bitter taste and it’s time to show that we can defeat them, and to make our fans happy.

“There are only two games left at Old Trafford: Leicester now and Bournemouth the last week, with visits to Norwich and West Ham in between.”