It has been reported that Manchester United skipper Wayne Rooney has made it clear to teammates how important the FA Cup is this season. 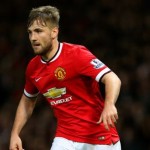 United face Cambridge United in their replay this week.

Asked if Rooney has been emphasising the importance of the competition, defender Luke Shaw said: “Of course he has. Wayne hasn’t won it and he’s going to want to win it this year.

“But the whole team look at it as a trophy we all want to win — especially now it’s the main priority because the league, I wouldn’t say it’s gone, but we’re quite far away.” Betting on Football from your Mobile