Bad news for all Manchester United fans as the club face being without Luke Shaw for the next three weeks. 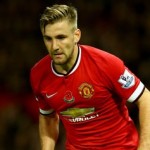 The Daily Mail reported that the England international could be facing three weeks out with ankle ligament damage.

The England international went over on his left ankle early on in Saturday’s victory over Arsenal and was forced off after 16 minutes.

He left the Emirates on crutches wearing a protective boot. The subsequent swelling and bruising has delayed the 19-year-old’s scan which will give a clearer picture of how serious the injury is. However, initial concerns are that he is facing a couple of weeks at least on the sidelines.