It has been reported that Manchester United defender Marcos Rojo is urging manager Louis van Gaal to keep hold of Angel di Maria. 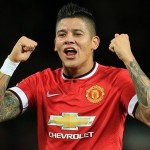 Poor form, injuries and an attempted break-in at his family home combined to make his first campaign in England one to forget.

“He’s one of the best in the world and on his day can do things like Messi and Ronaldo, that’s the level he’s on.

“I’m sure this coming season we will see very special things from him.”