It has been reported that Manchester United midfielder Marouane Fellaini is in hot water after an alleged text fitness row. 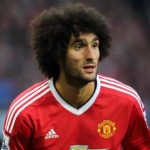 The Sunday Mirror reported that the Belgium international allegedly sent a string of sex texts to a fan while he was off sick from Manchester United.

The big-money player missed the Newcastle game this season after he called in to say he had stomach pain.

But while he was recuperating at home he allegedly sent the woman, 26, a series of ­messages begging for sex – as she was sitting in the stands at Old Trafford.

She said: “It was bizarre. I was ­watching the team, surrounded by United fans, and a player was messaging me inviting me round for sex.

“I remember thinking he can’t have been that sick.”

The £125,000-a-week star was banned from the August match. But all players are still expected to attend games.