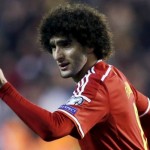 Reports are out claiming that Manchester United midfielder Marouane Fellaini struck twice for Belgium in their Euro qualifying win over Cyprus.

Fellaini fired in two goals at the King Baudouin Stadium in Brussels, as the hosts hammered their opponents 5-0 to go above them in Group B in the Euro 2016 qualifying competition.

The United star broke the deadlock after 21 minutes with a low shot on the turn from a header by Aston Villa striker Christian Benteke, who doubled the advantage himself with a diving header to convert Eden Hazard’s cross.

The first goal of the second half also came from Fellaini, with a looping long-range strike in the 66th minute. The 3-0 lead was almost immediately increased when Chelsea playmaker Hazard curled in Belgium’s fourth goal, while the fifth was added by substitute Michy Batshuayi after the previous scorers had all left the field.