It has been reported that Manchester United star Juan Mata has stated that he has fallen in love with the relaxed city of Manchester. 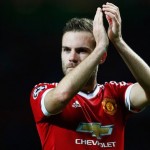 Many foreign players complain about the poor weather in Manchester but Spanish midfielder Mata is a huge fan of the city after spending a couple of years residing down south in London during his time at Chelsea.

Mata has revealed that he loves the music, architecture and museums in Manchester and has stated that he enjoys living in the laid back atmosphere of the northern quarter.

Speaking to El Pais, Mata said: “The best thing about living in Manchester is that it has a very ‘British’ atmosphere, very English. And then there is the music – a lot of really big groups have come out of Manchester. As for the architecture, it’s a very English city.

“There are galleries, museums, good restaurants… The only down side is the weather. I adapted really well because I had already lived in London. Now I’ve spent five years in England and it’s gone really quickly.

“It only seems like yesterday when I was in Valencia. I’m really happy with how it’s all turned out. London is fantastic – it’s like various cities in one but it moves so quickly – at a thousand miles an hour; it’s a bit crazy. Manchester is more laid back, it’s a normal city.”

“I am very happy in Manchester. I have the feeling that I have only just arrived and I’ve got a lot of things I want to do.”