It has been reported that Manchester United attacker Memphis Depay was delighted with his goal in victory at Watford. 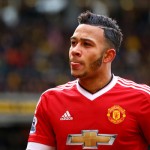 The Dutch international was handed a striker’s role with close support from Jesse Lingard at Vicarage Road. The Dutchman enjoyed the freedom the position provides and was over the moon to get on the scoresheet.

“The system was different, but we have a little bit more freedom and there was space in behind also which we took advantage of. I think we did it well and I enjoyed the game,” he told MUTV.

“It was a difficult game in the end. We started well in the first half but the second half was a little bit difficult. But to get three points out of it was good.

“I enjoyed the goal a lot, of course. I like to score goals. It was important for me to score a goal when I got a chance. I was happy. I like it when the fans are behind us and it was a nice moment [to celebrate with the fans].”