It has been revealed that Manchester United winger Memphis Depay faces the axe for their trip to Everton. 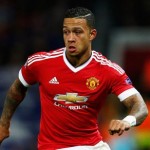 The 21-year-old Dutch international has failed to hit the heights expected following his £25m move from PSV Eindhoven and concerns about his attitude has Louis van Gaal sharpening his axe.

Ryan Giggs warned Depay about his off-field antics following his poor performance in the 3-0 defeat at Arsenal.

And a source told The Sun: “He has been acting really big time around the camp which is starting to annoy a number of people.”