It has been revealed that Manchester United midfielder Morgan Schneiderlin has revealed he is happy to fly under the radar and is not concerned about seeking praise for his performances this season. 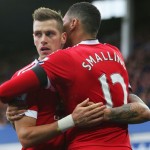 The gritty 26-year-old French international told Manchester United’s official website he is not interested in being the in the spotlight, and his only concern is helping the Red Devils win.

“I’m a team player. I don’t play to chase praise from anyone,” Schneiderlin said.

“Of course, you have to play as well as you can but I don’t play to have good ratings in the paper or anything like that. I just play to win games and give my team the best possibilities.

“But a lot of players are working hard, making some crucial challenges and doing some good things.

“Yet sometimes, of course, we are bit out of the spotlight, if I can say that. But for me, I don’t care about being in the spotlight.”