It has been reported that Manchester United midfielder Morgan Schneiderlin admits one goal is enough for manager Louis van Gaal. 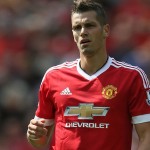 The French international midfielder describes the former Ajax, Barcelona and Bayern Munich manager as ‘strict’ – and has revealed his emphasis on not conceding.

“I have to protect my defence,” said the former Southampton star to So Foot.

“I have a pivoting role with Michael Carrick, who is a great player with the ball and knows how to dictate the game.

“After that, we have four great players ahead of us, so we’re more there for support, to feed them, and leaving them to do their magic.

“With time, I’ll start shooting from distance again, but the most important for us is to not concede any goals, meaning that we only need to score one to get the three points.”