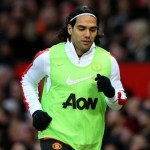 It has been revealed that Radamel Falcao is eager to experience the famous Manchester derby.

Manchester United host neighbours Manchester City at Old Trafford on Sunday and the Colombian striker, who has not started for the Red Devils in the Premier League since February 28, wants in.

“It really means a lot to our fans and theirs, so of course I’d be thrilled to play in this match on Sunday. The atmosphere will be phenomenal,” he said.

“In Manchester the derby means a lot. Unfortunately I didn’t play in the derby earlier this season, but you could sense the atmosphere in the city for more than a week before the match itself, it was all people were talking about.”

Falcao was speaking at the #HeadtoHead event for Puma’s ‘evoSPEED 1.3’ where he appeared alongside City star Sergio Aguero.