It has been reported that Robin van Persie insists the Holland national team owes manager Guus Hiddink a win this weekend. 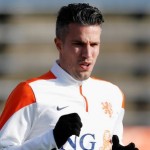 The Dutch boss said he would step down if his side loses to Latvia in Euro2016 qualifying on Sunday following two defeats in their opening three matches of the campaign.

Holland lost 3-2 to Mexico in a friendly on Wednesday, placing even further pressure on Hiddink, and Manchester United striker van Persie is adamant that the Oranje need to produce a victory in their next Group A fixture in Amsterdam.

The former Arsenal striker said : “Against Latvia, it sounds like a good plan. We have to win that game,”.

“Anyway, we owe it to Hiddink. He is playing a poker game with his announcement that he is leaving with a defeat. We do not want to lose him.

“You can view his remark differently, however. You could say it is because he has a lot of confidence in us.”

The Dutch currently sit third on the group table with only three points from three outings after losses to the Czech Republic and Iceland while Latvia are a further point behind in fourth.

Jordi Alba Linked With A Move To Manchester United