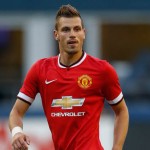 It has been reported that Manchester United midfielder Morgan Schneiderlin is in doubt for the Red Devils’ Champions League fixture against CSKA Moscow on Tuesday.

The 25-year-old French international played 90 minutes in United’s 0-0 draw with Crystal Palace in the Premier League on Saturday, but was not present at the club’s final training run before the clash with the Russian outfit at Old Trafford.

Schneiderlin’s absence from training was put down to ‘personal reasons’, but it remains to be seen if the Frenchman will suit up for the Red Devils in what is shaping as a crucial fixture in Group B.