It has been revealed that Manchester United midfielder Morgan Schneiderlin is proud to be playing for the club of Eric Cantona. 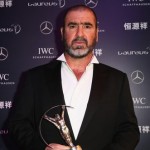 The France international midfielder, 25, joined from Southampton in a £25m deal this summer.

“I have seen videos of him,” he said of Cantona.

“I adore him. I love footballers who have character, personality. You need players like that. Cantona says what he thinks.

“I have seen interviews with him which made me laugh. I used to love the arrogance when he scored and looked at the crowd.”