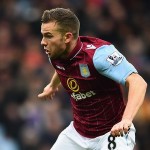 Reports are out claiming that Aston Villa midfielder Tom Cleverley is a shock target for Tottenham and Arsenal.

Cleverley are on-loan at Villa from Manchester United, where he comes off contract in June.

Cleverley has also attracted attention on the continent and has been offered contracts in Italy and Spain, along with German club Schalke.