It has been reported that Manchester United defender Tyler Blackett hopes for an extended chance at centre-half for Celtic. 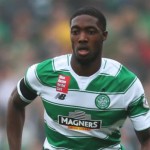 Blackett featured in the role for victory over Motherwell.

He said: “I’m comfortable in central defence. I played there all last season. I’ve played left back previously but I played at centre back all of last season and have more experience there.

“There’s competition for each place really but it is just about doing the best in training and hopefully getting picked on the day. If you do well then hopefully you stay in the team. We are just trying to do our best and see what happens.

“Against Motherwell the whole defence and team played well. We all tried to do our best.”