It has been revealed that England captain Wayne Rooney will miss Friday’s Euro 2016 qualifier against Estonia at Wembley. 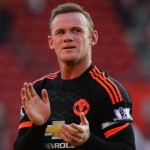 The 29-year-old – England’s record goalscorer – has not trained fully this week after injuring an ankle in Manchester United’s defeat at Arsenal.

Rooney will remain with the squad for Friday’s game, before which he will receive a commemorative golden boot from Sir Bobby Charlton, whose record he beat when he scored his 50th international goal in the victory over Switzerland last month.