It has been reported that Wayne Rooney insists he would be thrilled to become England’s top goalscorer. 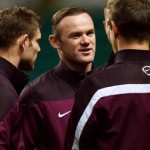 The Manchester United striker netted a double in Tuesday night’s 3-1 friendly win over Scotland in Glasgow to move to 46 goals from 101 international caps.

England captain Rooney is now only three goals behind Sir Bobby Charlton’s Three Lions record of 49 and he admits it would be a massive thrill if he could produce a new national team high.

“I’m just enjoying my football at the minute,” he told ITV.

“I’m enjoying playing for England and I’ve had a good run of scoring goals.

“I hope it continues and if that means breaking the record I’ll be absolutely delighted.”