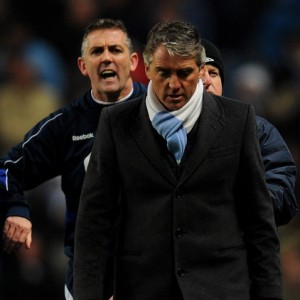 Manchester City held on with 10 men to grab a 1-0 victory over Bolton at Eastlands and end a poor run of scoring form at home in the Premier League.

Carlos Tevez scored the only goal of the game after four minutes and, while City could have had more, they were also fortunate not to concede to a resolute Bolton side.

Their already-restless fans were made even more nervous when Aleksandar Kolarov received his second yellow card in quick succession with 12 minutes remaining in the match.

However they held on for three points against their North-West rivals to keep fourth place in the table, while Bolton remain sixth.