Edin Dzeko scored and missed a penalty as Manchester City won the Barclays Asia Trophy in Hong Kong with 1-0 win against Sunderland in the final. 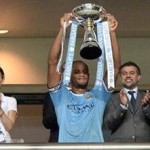 Dzeko’s superb solo strike in the first half proved to be enough against a competitive Sunderland side in challenging weather conditions.

After back-to-back defeats in South Africa, City recovered to pick up a semi-final win against South China, before a single-goal victory against Sunderland.

Even though the Black Cats started strongly, Dzeko popped up at the other end with a fabulous finish on eight minutes from 18 yards to hand the Citizens a lead.

Dzeko and new-boy Alvaro Negredo led the attack with the Spanish forward missing a fairly clean effort at goal soon after.

The conditions worsened throughout the half with the heavy rain giving the pitch another soaking.