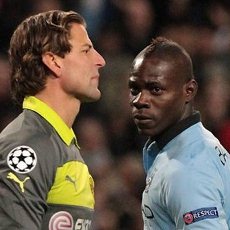 The German champions looked set to edge a contest dominated by both goalkeepers after Marco Reus pounced on a Jack Rodwell mistake to score just after the hour.

City keeper Joe Hart and his opposite number Roman Weidenfeller had both produced a string of outstanding saves to keep their respective sides in the game at the Etihad Stadium.

Balotelli’s late effort, after a contentious handball decision, ensured City now at least have a point from their opening two games in Group D.