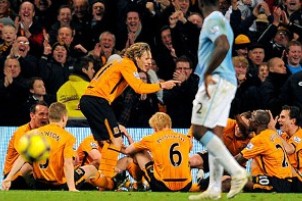 Joker Jimmy Bullard performed a repeat of Phil Brown’s controversial half-time team-talk – but after rescuing a point for Hull on their return to Manchester City.

Brown’s amazing decision has been cited by many as the moment the Tigers fortunes began to nosedive last season. Yet Bullard could not stop himself having a laugh at his manager’s expense after his 81st minute equaliser from a spot-kick Mark Hughes is sure to feel aggrieved by.

From virtually the exact spot where Brown delivered his address, the former Wigan star pointed to all his team-mates in turn to give the gleeful Hull fans a repeat performance.

As well as maintaining Hull’s recent revival, it condemned City to a seventh successive Premier League draw. Yet again the Blues tossed away a winning position and, in front of chairman Khaldoon al-Mubarak, the hosts were booed off amid growing concern at what is becoming a mid-table position despite a summer outlay of £120 million by the City manager.