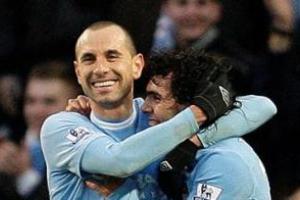 Manchester City eased to a 2-0 Premier League win over Stoke City at Eastlands in Roberto Mancini’s first match in charge.

First-half goals from Martin Petrov and Carlos Tevez were enough for the hosts, who were always in control and never looked like losing the lead as they did so often under former boss Mark Hughes.

City were missing the injured Emmanuel Adebayor, Shaun Wright-Phillips and Wayne Bridge and had Carlos Tevez as a lone striker with Craig Bellamy dropped to the bench.

The absences mattered little as they dominated Stoke, who barely kept the ball for more than two passes and only had one chance to show for their first half’s work.