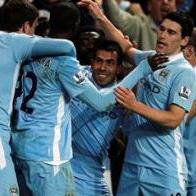 Carlos Tevez made a heroic return to action by setting up Samir Nasri’s late winner as Premier League title hopefuls Manchester City came from behind to complete a rousing 2-1 victory over Chelsea at the Etihad Stadium.

Roberto Mancini’s side looked set to fall four points behind city rivals Manchester United at the summit of the table when Gary Cahill scored a deflected opening goal for Chelsea on the hour mark, but his Argentina strikers had other ideas as they helped haul City back from the brink of a bruising defeat.

Sergio Aguero netted a penalty on 78 minutes after Michael Essien was deemed to have handled in the box before Tevez – on for Nigel De Jong after 66 minutes – slipped the ball into the path of Nasri to chip Petr Cech for the winning goal on 85 minutes as scenes of euphoria engulfed the stadium.

It was Tevez’s first appearance for City six months after he infamously refused to appear as a substitute during a Champions League match at Bayern Munich.

City are now only a point behind leaders United after a 20th straight league win at home – a record for the Premier League – with nine games left in their quest for the flag. They last sampled a loss at home in the Premier League to Everton some 15 months ago.