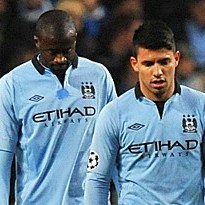 Manchester City were all but eliminated from the Champions League despite producing a stirring fightback against Ajax to draw 2-2.

Yaya Toure and Sergio Aguero struck as City fought back from 2-0 down but the Premier League champions were forced to settle for a draw and remain winless in Group D despite a frantic finish.

Siem de Jong, who scored in the Dutch side’s defeat of City in Amsterdam a fortnight ago, found the net twice for the visitors inside the opening 17 minutes at the Etihad Stadium.

The result left City with just two points from four games and needing two victories and other results to go their way to claim a place in the knockout stages.