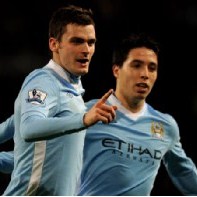 Sergio Aguero turned in another scintillating performance with two goals against Stoke to send Manchester City top of the table on Christmas Day for the first time since 1929.

With one-time hero Carlos Tevez due to be at the centre of talks between City officials and their AC Milan counterparts on Thursday, the man who stepped into his shoes as the most popular South American at the club took centre stage.

Signed for a club record £38 million from Atletico Madrid in the summer, unlike Tevez, who remains back in Argentina and has been nothing but trouble for the past 12 months, Aguero has not been a moment’s bother.

At least, he has not been a problem to City. Opposition defences may choose to disagree.

Beaten by tonight’s opponents in last season’s FA Cup final, Stoke were the latest to feel the force of Aguero’s power, the striker bagging a goal either side of the interval to take his seasonal tally to 15.