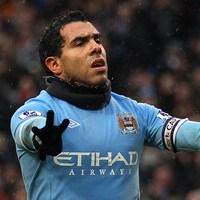 The Argentina striker sent visiting keeper Boaz Myhill the wrong way from the penalty spot for the opener on 17 minutes after Aleksandar Kolarov tumbled under pressure from Steven Reid in the penalty box.

That decision looked a bit harsh with Kolarov going to ground under minimal contact from the visiting player.

There was no question marks over the second goal on 22 minutes as Tevez gave Jonas Olsson the slip to slide the ball under the exposed Myhill.

The home skipper made it three with his second penalty of the day and his 18th league goal of the season on 38 minutes when Jerome Thomas was deemed to have handled in the area.

Myhill went the right way this time, but the ball was already beyond him by the time he had completed his dive.