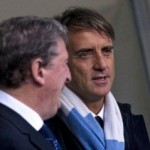 A goal either side of half-time from Sergio Aguero and strikes from Carlos Tevez and David Silva handed Manchester City a comfortable 4-0 Premier League victory over West Bromwich Albion at the Etihad Stadium.

Aguero struck inside six minutes and City took a one-goal advantage into the break, before an unforgiving second half display from Roberto Mancini’s side produced three further goals as West Brom offered little in the way of going forward.

Coupled with Manchester United’s 1-0 defeat at Wigan, City closed the gap to their rivals and the league leaders to five points to add life to the title race, their prospects in which had appeared dead and buried before Wednesday evening’s results. Whilst City remain some way off United, this victory gave them renewed hope with five games of the season still left to play.