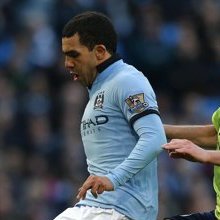 Sergio Aguero and Carlos Tevez each struck twice as Manchester City fired a warning to their critics with an emphatic win over Aston Villa.

The Barclays Premier League champions went ahead through David Silva at the Etihad Stadium and then clicked into gear after being awarded a controversial penalty early in the second half.

Aguero struck from the spot and added another while Tevez, who celebrated by pretending to drive after his Porsche was impounded by police, added his own penalty and a close-range finish.

Villa may rue the decision which led to City’s second, apparently given for handball against Andreas Weimann, but they were well beaten in the end.

The performance of City in the latter stages, particularly that of Aguero and Tevez, took the talk away from the absence of Mario Balotelli.