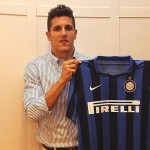 It has been reported that Manchester City say striker Stevan Jovetic has signed for Inter Milan on an 18-month loan with a view to a permanent transfer.

The 25-year-old Montenegrin joined City from Fiorentina in summer 2013, but has struggled with injury.

However, Inter say he has gone on a four-year-deal.