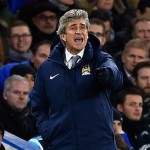 It has been reported that Manchester City boss Manuel Pellegrini took a swipe at Chelsea’s style after their 1-1 draw at Stamford Bridge.

Just a few moments earlier Loic Remy, deputising for the suspended Diego Costa, had given the hosts the lead.

The Chilean said: “Both teams have a clear style of play. Everyone wants to play in the way they think is better.

“Our team tried to win the game from the first minute till the end. I’m very proud about that. It’s not easy to come here, to Stamford Bridge, against the leaders of the Premier League, with very good players.

“We create, especially in the first half, clear chances to deserve more than the point.

Samuel Eto’o Struggling To Be Fit For PSG Clash