Reports are out claiming that Manchester City are watching Internacional midfielder Charles Aranguiz. 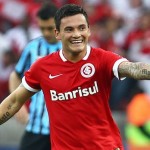 The Internacional all-rounder can play centrally or wide and has been followed by Arsenal and Bayer Leverkusen also this season.

The 26-year-old Aranguiz says he would like to move to Europe.

“It’s something that makes me feel good, it makes me proud that I am doing things well. If it is true, I would love to go,” he said.