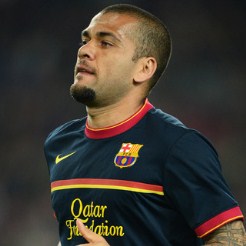 Sensational news are out and it has been revealed that Manchester City have launched a bid for Barcelona fullback Daniel Alves.

According to Sport, the newly crowned Premier League champions have made an offer of €15m plus Aleksandar Kolarov for the Brazil international.

On their part, it is said that the Spanish giants are prepared to sell the 29 year old this summer.

It is also said that Barcelona would be interested in Kolarov as they’re in the market for a new left-back. Lionel Messi Eager To Meet Napoli In The Champions League