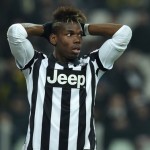 It has been reported that Manchester City are keeping tabs on Paul Pogba at Juventus.

Pogba’s agent, Mino Raiola, has raised the prospect of the Frenchman leaving in the summer.

The Mail on Sunday says City are still keen on luring Pogba back to Manchester.

The former Manchester United youth product is valued in the region of £60 million. City could offer Yaya Toure as part of the deal, although Paris Saint-Germain would enter the market should the Ivorian become available. Man Utd, Man City To Do Battle For Terence Kongolo